Circularity and the Environment

We are using ever more stuff, and creating growing mountains of trash. Currently we extract around 100 billion tonnes of stuff. More than 90% of it is virgin material extracted from the earth. Only 30 billion tonnes of it makes anything of permanence. All the rest is burned as fuel or used for a short time and discarded. Every stage of this process creates pollution and changes the climate through greenhouse gas emissions.

The 90% that is virgin material is sometimes called a linear economy. Resources are freshly obtained, used, then discarded. The barely 10% that isn't treated this way can be called a circular process. Something we created from virgin resources has been used again. The idea behind circularity is to drive up the 10% to a much higher figure, ultimately as close to 100% as we can manage.

For most of human history, we did exactly that. We used natural substances such as wood, stone, metal and other things we could gather up. Because of the work involved in making them useful, they were cared for. Eventually, they would simply crumble or rot, or be used for something else.

Things are not standing still. The amount of stuff we are extracting and discarding is growing at an alarming rate. It has almost doubled since the 2000 millennium. And some of what we discard is hazardous and has a very long lifetime - the "forever chemicals". If we go on like this, we will damage our own environment to the point where it will no longer sustain us.

Modern society has built complex systems that use materials. The "Circularity Gap Report" has investigated in detail. The diagram below is part of the Gap Report 2022. The web site and the report have vastly more information than we can convey here. 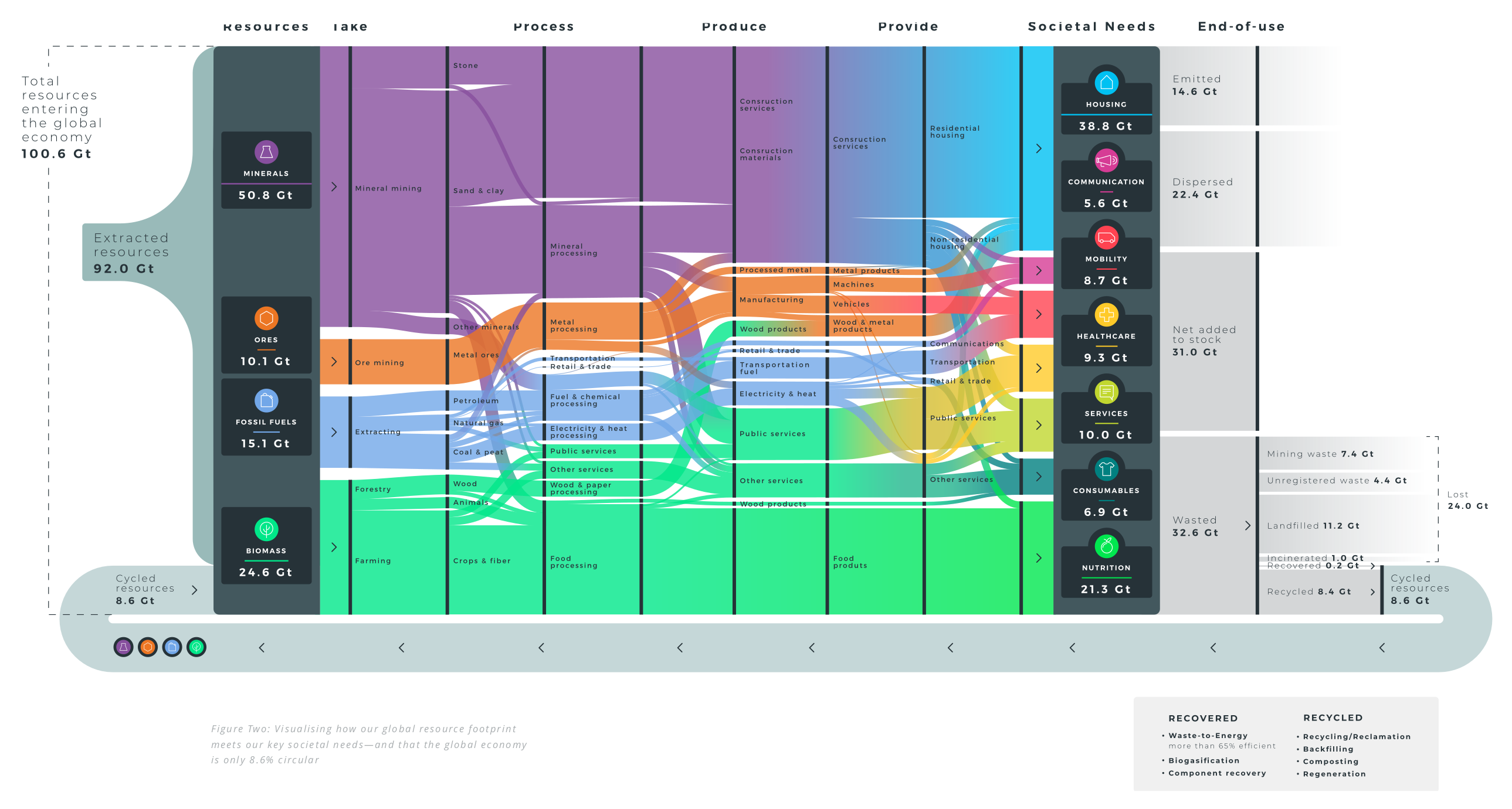 To move towards circularity will take major changes. Many of them are difficult for individuals to handle. But we can try to make choices that help, and we can ask people we buy from the operate in a more circular fashion.

Easily the biggest consumer of resources is house building. We need to build better houses, with lower environmental impact, and make them last longer. We need to build them out of materials that can ultimately be reused.

Fossil fuels are another huge factor. Some are immediately burned for heating, transport or industrial processes. Some is used to make numerous different materials, many of which are soon thrown away. This includes areas where we can, as individuals, have some impact.

But major changes need to be made by manufacturers. Our role there is to press them to create products that are designed with reuse or recycling in mind. Every product should have a plan and a financial scheme for handling the end of its life in its original form.

Grav was with by Trilby Media.